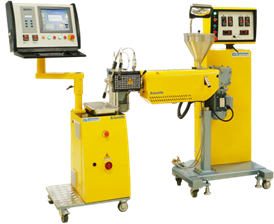 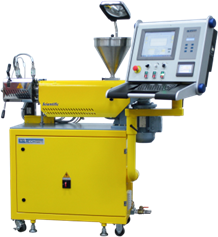 Filter test body with a streamlined integrated Gear Pump heated with electric cartridge heaters. The gear pump delivers 3 cc/RPM and is driven by a servo motor which provides constant torque and gives very accurate feed rate. The gear pump drive shaft bearing is water cooled to ensure a leak free operation and the shaft is also equipped with an easy exchangeable shear pin to prevent overload of the gears.

A pressure and melt temperature sensor is inserted in the channel to the gear pump inlet. The pressure sensor is connected to a pressure control instrument that in turn will regulate the extruder screw speed to ensure that it delivers a steady flow of polymer at a constant pressure.

The filter test head is mounted in line with the gear pump and extruder as shown to the right. This very streamlined melt flow from extruder straight to the filter disk eliminates completely any dead corners and melt channels which makes cleaning very easy. Thus it is possible to use a minimal amount of virgin resin of only a few hundred grams for cleaning both extruder and filter test head. This in turns saves a lot of time and resin.

The head is equipped with our new clamping system which incorporates a Quick Lock system as shown on the picture to the left. Here the filter retainer with the filter disk is clamped simply by turning the two handles.

The nozzle is equipped with threads and will screw in to the filter retainer when turned. This new system makes changing of filter very fast and easy and it also ensures that the filter is fully sealed at all times. The breaker plate for the 34 mm filter disks is mounted on a retainer plate with a convenient handle so that it can be quickly inserted and removed from the side of the filter test head. Our filter test head is of a streamlined design with no dead corners which ensures a very easy cleaning from one batch to another.

The heating of the head is made with cartridge heaters and the temperature is regulated very accurately by the on board computer with PID functions and auto tuning. The filter test with gear pump has a working range of 0 to 300 bars pressure.

A practical feature is the draw out stainless steel tray below the filter tester head which conveniently collect the resin coming out from the nozzle. The tray can be removed from its frame for emptying out.

OFFERING EXCELLENT RECORDING AND REPORTING OF ALL TEST RESULTS

With this new version the recording and controls are made with an on-board Industrial Panel PC with a large 12.1 inch LCD screen. The control panel is also equipped with an in house made electronic microchip circuit which registers and controls signals from pressure transducers and thermocouples.

The test parameters can be keyed in on a very practical conventional Key Board with large ball type Scroll Mouse mounted on the control panel. This feature is a lot easier to use than for instance with a touch screen, since the running parameters and batch data can be keyed in on the key board in the same way as you work with a normal PC. However, the touch screen also has a key board screen if you prefer to use this system.

The on-board Industrial Type Panel PC has high memory capacity, using a solid 2 GB flash card instead of hard disk to ensure the system is insensitive to vibrations and chocks. The PC can store thousands of test result, which can be recalled on screen for immediate comparison and/or downloaded to another PC through an USB port on the side of the control panel

The lower part of the control panel has start/stop buttons for gear pump and extruder as well as main on/off and emergency switches. It also contains a speed control button for the screw RPM and a selector switch for switching the filter tester from manual to auto mode. The second selector switch is for on/off of the on board panel PC

The control panel has a second smaller touch screen controlling the extruder parameters like heating and cooling of all barrel zones including auto tuning. The screen shows actual motor load in percent of full load as well as screw RPM. Additional this extruder control screen features an alarm system which will warn if any functions of the extruder are not working properly

The PC main screen shown above has a multitude of text boxes for entering on the keyboard all the essential batch parameters such as:

The panels above control the gear pump parameters in respect of pump RPM as well as inlet pressure and you can here set the required values with the up/down scroll buttons. It also controls the temperature of the filter test head. Further you can also set the maximum allowed pressure on the filter which will stop the extruder if the set value is exceeded.

The large central graphic area on the screen will display continuously processing curves for pressure before gear pump, filter pressure as well as melt temperatures before and after gear pump. The computer screen will show the pressure build up on the filter in real time

After the test is completed, the data can be stored on board as well as transferred to another PC and printed with any kind of printer through ports on the rear of the control panel.

The software is based on Windows 7 and all test results can be downloaded to another PC simply by copying and pasting. Data can also be transferred to a memory stick through a USB port on the back of the control panel.

In conclusion the computerized filter tester offers the following advantages:

All these data can easily be keyed in with the help of the on board keyboard.

The test result with graphs and all data can be downloaded to an external PC and it can easily be stored and emailed to your customer etc. You will here instantly have an undisputable evidence of the quality of your masterbatch or compound which is useful in case of complaints and also to show quality comparison in between a reference or competing product.

20 mm, 30 L/D Laboratory single screw Extruder Type LE20-30/P, for processing of all kinds of polymers such as Polyolefines, Styrenics, PA, PET, PC etc. The extruder has the following features: