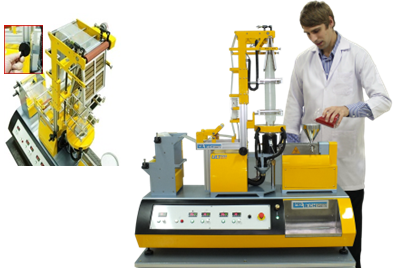 The line was secretly designed and built by our engineers and technicians during their spare time and was presented as a New Years gift to our company’s manager. A lot of engineering has gone into this design, completely designed and built from scratch and the result is truly amazing. This Ultra Micro film blowing line worked so well that we decided to offer it to our entire customer worldwide. It was shown for the first time in April 2012 at the NPE exhibition in USA and it drew a huge crowd at all times during show hours.

The film tower has a total width of 150 mm and can accommodate a film of a lay flat width up to 100 mm. The rubber nip-rolls are spring loaded and driven with a variable speed DC motor. The A-frame is made with adjustable collapsing angle and there are two film bubble stabilizing frames with adjustments to accommodate different film bubble diameters The tower has a motorized height adjustment with die to nip-roll distance from 430 to 570 mm The die is of spiral mandrel type with inlet at the bottom and connected to the extruder with a c-clamp. The air ring has an adjustable lip opening and the cooling air is supplied by a variable speed turbo blower built in to the tower sub cabinet end connected to the air ring with four flex hoses.

The extruder is made with a conical screw and barrel having a starting diameter of 18 mm and ending diameter of 8 mm. The screw length is 24 L/D; Thanks to the conical design, the extruder can be fed with comparatively large pellets of a max size of 1.5 x 1.5mm. The barrel has one heating zone which is controlled by a PID temperature controller with digital set and readout values. The drive is made with a geared variable speed DC motor and the speed control is from a potentiometer knob on the sub cabinet panel.
The hopper has a turret valve, same as with our larger extruders and it has a discharge pipe on the side to empty out the hopper.
The extruder has a non functional control panel mounted on a swing arm. The panel is an exact replica of our larger extruders Downside of tower is equipped with a film inspection lamp Note the pen on the control
panel. This is just to give an idea of the small size of the extruder The film wind up system comprises of a set of rubber nip-rolls on the out feed conveyor of the film tower and a two station wind up unit. The wind up unit has two spring loaded bobbin film cores which are both driven with a variable speed geared DC motor. The speed regulation is made with a turning knob on the lower front or the sub cabinet. Both wind up shafts have a slip clutch system to give sufficient tensioning of the film web. 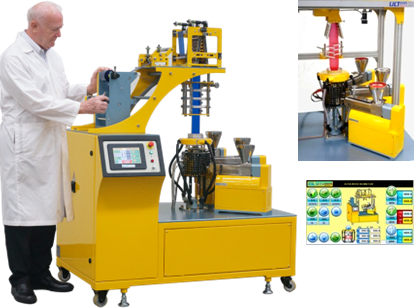 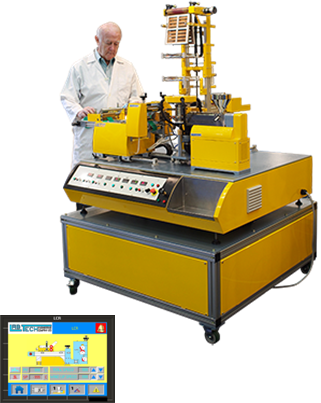 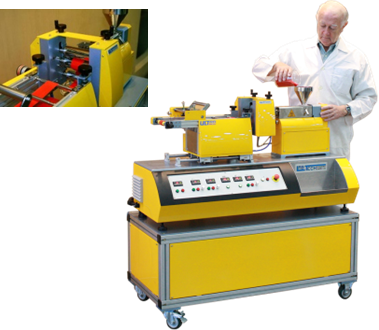 As with all our other Ultra Micro lines, this Co-Ex version was designed and built by our engineers on their spare time and given as a gift to our manager.The line features two units of our conical extruders which have the unique features to be able to use regular plastic pellet sizes. This is made possible by having an in feed section diameter of 18 mm which then gradually reduces to 8 mm at the screw tip.

The line features a section type of feed block which divided the in flow from the two extruders into layers A+B+A. This feed block type ensures a very even layer thickness. The layer thickness is regulated by the speed from the extruders which are driven by infinitely variable speed servo motors with a very constant RPM.

The flat die is of coat hanger type and has a set of adjustment screws for the lip gap. With this the gap can be set from 0.1 to 0.3 mm The feed block and die is connected to the extruders with C-Clamps. They can easily be removed for fast cleaning of both extruders as well as feed block and die.